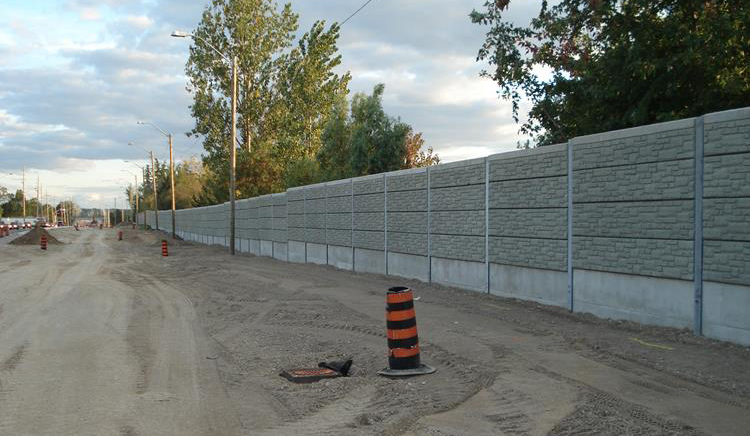 MIDLAND, VA., Nov, 2015 – The City of London, Ontario, recently wrapped up a road widening project that incorporated absorptive sound wall containing SoftSoundTM, a superior sound absorptive technology. The barriers alleviated the projected increase of noise caused by both the construction process and the expected increase in traffic volume (once the construction was completed).

For the project, which was managed in two consecutive phases, the city widened a major city thoroughfare to four lanes, urbanized the route with curbs, gutters, sidewalks and bicycle lanes, installed streetlights, and put in water, storm, and sanitary facilities. Design Concrete Systems, Ltd., of Seaforth, Ontario, cast both phases of the noise barrier wall aspect of the project. SoftSound is developed and licensed by Easi-Set Worldwide and Design Concrete Systems is a licensed producer of the product.

A proprietary material that is molded and compressed to meet the desired technical and aesthetic requirements, SoftSound combines a highly-specialized mineralized wood-chip aggregate using cement as a binder in a specific and exacting manufacturing process. Once installed, SoftSound surpasses other products for sound absorption, durability, strength, and moldability.

According to Kenn Hines, General Manager, SoftSound’s engineering design helped the city save money on overall project costs by integrating the noise wall with the traditional project walls. “This resulted in an aesthetically appealing, uniform effect that both the city and the residents wanted,” said Hines. The project took about a year to complete and included about 45,000 square feet of SoftSound wall.

As an approved supplier for the Ministry of Transportation Ontario (MTO), Design Concrete Systems produces noise walls that meet all provincial standards. The precast walls were selected based on a noise study conducted by city engineers, and all barrier system components were manufactured and closely monitored for quality in Design Concrete Systems’ CSA-designed facility. “The installers were able to set the wall up in a matter of days,” said Hines, “as opposed to spending months forming and pouring it onsite.”

Using SoftSound also helped the city assuage homeowners’ concerns about how the completed wall would look and how well it would blend with existing structures. “We had to jump through some hoops to show them how visually- and aesthetically-appealing the new wall was going to be,” said Hines. “Once it was installed, everyone was very happy with the end result.”

Easi-Set® Worldwide, a subsidiary of Smith-Midland Corporation (DE), a publicly traded company (OTCQB: SMID), licenses the production and sale of proprietary precast products around the world. For more information on SoftSound, call (540) 439-3266 or visit www.SoftSoundWall.com or www.EasiSet.com.