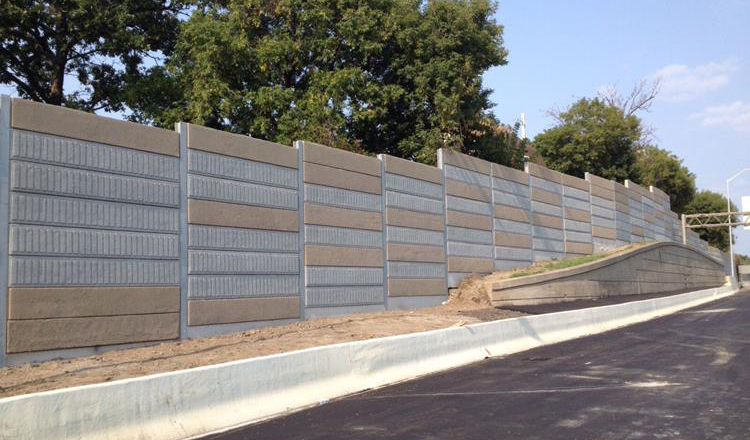 MIDLAND, VA., Nov, 2015 – SoftSound™, When the existing noise barriers on Highway 417 in Ottawa began to show their age, The Ministry of Transportation (MTO) installed 15,000 square feet of absorptive sound wall containing SoftSoundTM to replace the aging structures. Made with superior sound absorptive technology, the precast wall was installed as part of a larger, highway widening and rehabilitation project.

A proprietary material that is molded and compressed to meet the desired technical and aesthetic requirements, SoftSound combines a highly-specialized mineralized wood-chip aggregate using cement as a binder in a specific and exacting manufacturing process. Once installed, SoftSound surpasses other products for sound absorption, durability, strength, and moldability.

Manufactured by Design Concrete Systems, Ltd., of Seaforth, Ontario, the new wall replaces a steel noise barrier that was failing, according to Kenn Hines, General Manager. The MTO was working on ramp reconstruction while tearing down the existing barrier – a process that included Design Concrete Systems’ traffic barrier system. Time was of the essence on the project, since it interrupted traffic on a major thoroughfare. “Most people get into Ottawa on 417,” said Hines, “so the MTO couldn’t afford to shut it down for very long.”

The installation of the noise barrier system was a coordinated effort that included the supplier, installer, and the MTO. By working together, the three entities were able to minimize the disruption of traffic flow on the major highway and adjacent onramp. Using the integrated noise barrier and traffic barrier system, the MTO benefitted from a cost-effective solution that met all provincial safety standards and noise reduction requirements. SoftSound is developed and licensed by Easi-Set Worldwide and Design Concrete Systems is a licensed producer of the product.

>Hines said the precast walls were selected for their ability to absorb sounds and for ease of installation. “The installer literally just set them in place and moved on,” said Hines, whose company manufactured SoftSound walls that matched an existing pattern featured on several other structures. “The colors were made in fluted pattern, and according to the project’s specifications,” said Hines, adding that everyone was satisfied with the project. “Everyone was really happy with the outcome, including the MTO.”

The engineered design was easily adjusted to accommodate existing site elevations, including an onsite retaining section. “We designed the wall so that the new noise wall system would connect to the existing noise wall barrier already onsite,” said Hines, “in order to facilitate a seamless transition.”

Easi-Set® Worldwide, a subsidiary of Smith-Midland Corporation (DE), a publicly traded company (OTCQB: SMID), licenses the production and sale of proprietary precast products around the world. For more information on SoftSound, call (540) 439-3266 or visit www.SoftSoundWall.com or www.EasiSet.com.